Posted on February 9, 2017 by CornerLotCornucopia Our low temperatures are dipping in the teens this time of year – it’s the perfect weather for gardening! Well, indoor gardening, that is.

Living in Kansas, we can see snow and freezing temperatures surprise us even as late as  May, though sometimes our last frost is the beginning of April. The running joke is that if you don’t like the weather here, wait 5 minutes. I distinctly remember dashing home from a morning recital my junior year of college to yank the tarp out of the garage and cover our seedlings in the garden to shield them from a sudden snowstorm – in the first week of May. We tend to run the gamut – sometimes lows below zero in the winter and highs in the 100’s in August. Our gardens have to be hardy, well-watered, and set up for success.

Evan picked out our seed packets from our local garden center this week – we have no particular ties to seed companies, but our preferred choices are organic and heirloom as often as possible. Let’s take the best of the best for this volatile region!

We haven’t grown many of these varieties, but we’re sticking to the same type of plants we grew last year – tomatoes, peppers, squash, cucumbers, beans, and so on. We might start shopping for our very own homestead as soon as this summer, so there is a chance that we’ll have to leave this lovely garden behind, but we hope to pour as much love into these green little friends for as long as we have them.

First up are Italian Roma tomatoes – we always enjoy canning a large selection of tomatoes in addition to slicing tomatoes, and we’ve heard from friends that Romas are excellent for canning and produce well. Our tomatoes last year were yummy but few in number and late in coming.

Up next is a spaghetti squash variety – we accidentally grew spaghetti squash last year when we mistook some seedlings sprouting in our compost for cucumbers! Squash varieties tend to look the same when they sprout, but after the first two leaves develop things start to change. We had already transplanted the seedlings when we realized that they weren’t growing the way we knew cucumbers to grow. A couple of months later, we had 4 happy spaghetti squashes, and they lasted until nearly Christmas in our cellar! 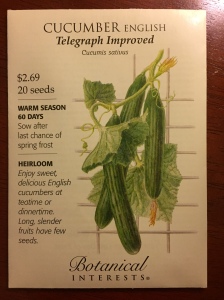 We’ve grown straight-8 cucumbers for several years now, and I just haven’t been super impressed with their slicing abilities. They can well, but I’m far more likely to eat sliced cucumbers than a jar of pickles each day. We’ll try “Telegraph Improved” and see how these do.

This is a new squash for us this year – in the last couple of seasons we have found some new ways to roast butternut squash with our holiday meals or winter vegetable roasts. Brussel sprouts, roasted butternut squash, onions, carrots, garlic, and a dash of salt & pepper with olive oil make for a delicious combination! 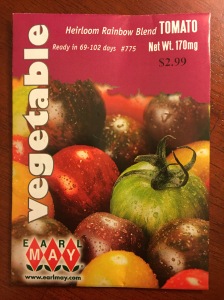 We’re continuing to experiment with finding the right slicing tomato – this year, maybe a rainbow blend will do the trick.

I have no experience with cowpeas, but the story of how these Michels cowpea seeds were gathered is just fascinating. A soldier was marching by a farm in the 1940s and decided to pick a few beans as a keepsake. He kept them safe for quite some time and they ended up planted on the family farm back in Kansas, and since then they’ve been added to the Seed Savers exchange program. 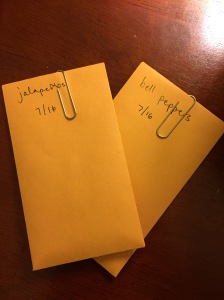 These envelopes are jalapeno and bell pepper seeds that I collected from our best-performing plants last year. We still have jars of hot peppers in our basement and we loved how thick-walled and strong our bell peppers turned out. Hopefully they’ll be just as delicious this year!

Our last packet is of some cayennes – we had problems with squirrels this year and cayenne peppers can be a natural deterrent. Usually the cayenne needs to be crushed or sprayed near the plants, but maybe proximity will also do the trick! They will also be helpful for making some salsas and pepper mixes.

I think we will also be planting some leftover black beans from last year as well as a round of onions and potatoes in addition to our usual herbs. Our peppers go in the indoor seed trays this weekend to give them 8-10 full weeks of growth before outdoor transplant – we’re guesstimating that the last frost will be Evan’s birthday, April 21 and we’re aiming for an outdoor transplant of around May 1. Stay tuned for more seedlings!

3 Comments on “Starting from Seed”

Your dollar is your vote

“You, as a food buyer, have the distinct privilege of proactively participating in shaping the world your children will inherit.”
― Joel Salatin, Holy Cows and Hog Heaven: The Food Buyer’s Guide to Farm Friendly Food